When I was growing up, I don't recall a time that I refused to eat what was placed in front of me.  Actually, many a childhood memory centers around the fact that my parents spent a lot of time trying to get me to STOP eating everything in sight.  I had a healthy appetite and I LOVED food.  I still love food!
And...here is where I wish I was funny, witty and fast with pop-culture references...because writing the rest of it (and reading it I'm sure) would be so much more fun!  Perhaps some of my fellow funny bloggers (Amy--Jessica--anyone?) can relate some of their struggles with the humor attached.


I am not sure where my children picked up their picky eating habits.  Not one of my children has graced me with a happy eating toddler-hood. Sarah and Dani have progressed into childhood and pre-tween-hood eating almost everything we place in front of them, so I know that eventually, they come around.  At some point, we can reason with kids to the point of at least trying something and then they figure out they like it and we're good to go.
I have had my share of Dinnertime Debacles, though.  And Helen's are taking the cake.  The child has faked choking, thrown horrendous fits with full mouths of food, chewed for 10 minutes and refused to swallow...you name it, I have lived it with my 5-year-old lately.
The other night, Craig made a deal with Helen that we'd go out to eat dinner the next night if everyone ate their dinner.  (Yeah, yeah...bribery...)
She sat there and didn't touch her dinner while the rest of us ate, but of course, we (parents) didn't want to punish Sarah and Dani, so we extended Helen's dinnertime and put the timer on to 25 minutes.  I proceeded with feeding Helen her bites of chicken/rice/broccoli casserole.  It was excruciating.  She threw a fit.  After she calmed down from that, she chewed one bite for 7 minutes and refused to swallow her food.  Somehow, we coerced her to eat all of her food within the allotted time and the family got a much-needed night out Wednesday night.
Tonight, the special was crock-pot pork chops and mushrooms over egg noodles. (I tell you what we're feeding the children so that you can see...we are not feeding them Gruel or Mush!)  We all sat down, said the blessing and began eating.  I announced that I'd be going for a walk after dinner and that I'd take any daughter(s) of mine who finished their food with me. (Yeah, yeah...bribery...of a different sort...we're getting desperate.)
And, so began the Dinnertime Debacle of Thursday night.  Helen allowed me to feed her a bite...she kind of fussed through it, but I thought things were going to go all right.  But then she started putzing around so I started the timer.  25 minutes is enough time for anyone to eat at a reasonable pace...especially a small 5-year-old's portion of food.  The meal went down hill from there.  She chewed the next bite for something like 9 minutes...pretended to swallow it and allow me to put another bite in her mouth which she chewed an additional 8 minutes and swallowed after I had completely lost my cool and yelled at her and removed her from the table and yelled at her again.
I really hate it when I yell at my kids.  I'm not the yelling type and I always know when my voice is raised to that extent and my teeth are gritting and I am balling my hands into fists, that I am hitting the pinnacle of my frustration.  It makes me cry if I get to the point of yelling at my kids.  And I don't like to cry in front of my kids, either.  I'm relieved that I hardly ever resort to striking my children (I can count on one hand the times in the last 3 years I've resorted to a swat on the bottom of any of my children), but I'm not so sure I'm proud of how much restraint that actually takes at times.
The timer ticked down the final five minutes or so and I took off to go on a walk with Sarah and Dani who had finished their food, without complaint, even (sometimes they finish, but they complain about it).  Helen was in all-out-sobbing-fit mode at this point.  I managed to tell her that it broke my heart that I couldn't take her on the walk and that I wanted to take her more than anything (and that was true), but that since she hadn't finished her dinner, we were going without her.  And then the tears started flowing as I walked out the door with the other two girls.
I would like to note that were I to serve chips and dip, chicken tenders and french fries at every meal, I would never have a fight with any of my children about eating (okay...Dom would not eat the chicken tenders, but he'd eat the other stuff).  What is up with that?!?
And it's not like I've played short-order cook and then all of a sudden stopped doing that, either.  I think Sarah was the only toddler who got that kind of service and even then, we struggled because we wanted her to drink milk and she refused.  But since 2004, the entire family - parents and children - have been fed the same thing at dinner.
Am I the only person in the world that has picky toddlers?  I mean, I have heard of some families that have one picky kid or maybe two out of the lot.  But I have gone four-for-four here on unbearable toddler years with regards to consuming healthy food.

I have considered that they've learned this behavior from each other since we've always allowed whoever the baby is, to sit in the high chair with the family at dinner time and "eat" with us whenever they start solids.  But I'm actually considering NOT allowing new baby boy to sit at the table and watch his picky older siblings (most likely the two closest to his age) refuse to eat what's set in front of them and give us a fight.  Perhaps if we bar him from the family dinnertime debacles and feed him individually until he is eating everything in sight...we can get a reprieve of this exhausting and aggravating problem.
After each dinnertime debacle, I feel like the biggest failure of a mother.  I know it's kind of silly and my hormones might have typed most of that last sentence...but seriously, it's a horrible feeling to wonder why your kid won't eat the food you put in front of them, over and over and over and over and over...
Have any of you ever dealt with this?  Any techniques that have helped you actually come through it with your sanity intact?  What do you think of my idea to keep new baby boy isolated at family dinnertime until we might be "safe" from continuing this problem?
I realize this isn't the most profound blog topic.  But it's seriously, really what is on my mind tonight.  I'm so tired of this problem. 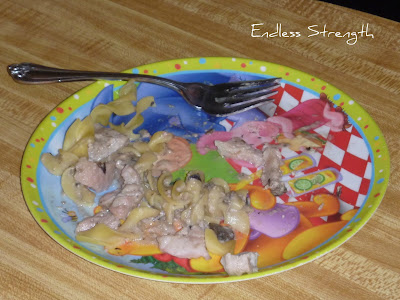 Posted by Endless Strength at 8:12 PM