The lovely Betty Beguiles is hosting a link-up for all of us to tell the world our story of becoming engaged.  I've never put it to words, so I was eager to participate!
Craig and I had been seeing each other exclusively for about a year when I started getting a little worried about whether our relationship was going to progress to the next level.  At this point in life, I had already spent about four years of my young adulthood waiting on another guy to figure out what a catch I was and pop the question, and when that didn't materialize, I finally cut off the relationship.  What that meant, unfortunately, for Craig was that I wasn't about to wait around on anyone for four years ever again.

While I wouldn't have phrased it this way then, I knew God had called me to marriage and I wasn't crazy about dating someone who wasn't called to marriage.  And, if they knew they were called to marriage, I wasn't too interested in waiting all that long to find out I wasn't "the one".  Don't get me wrong, I wasn't interested in rushing into anything either...dragging feet, though, wasn't going to go anywhere with me.
So, I started asking the questions that I  had waited 3 years to ask the other guy.  "Where do you see this going, Craig?"  "Are you interested in marriage at all?"  And actually, Craig had good answers (meaning, he answered in the positive that we would move forward at some point) but he was good about not actually committing before he was ready.
While we were Cradle Catholics, we were both lapsed in one way or another at the time.  And the idea of children, or really anything about what a Catholic marriage would look like wasn't necessarily on our minds.

Looking back, it seems like we were stuck in that place where we needed to know we were each other's one and only; Nothing more...but definitely something permanent...with a ring and a piece of paper to prove it was true.
So - with that introduction, here's the story:
It was Craig's birthday, I think he was turning 27.  I had been to a German festival the week before with Craig's mother and his sister and her kids where I had bought him this cool handmade, wooden beer mug for his birthday.  I remember fussing over the fact that it wasn't wrapped (it was an odd shape).
My sister and I shared a downtown apartment and she was home that night.
Craig arrived and came into the apartment where we all exchanged pleasantries and I was able to give him the gift I had for him.

The rest of it happened so fast.

Almost as soon as I gave him his gift, he seemed to be fumbling around by his shoe.  While he was fumbling with his sock/shoe, he was talking and saying something about how he had something for me, too.  I remember thinking, "Why would he have something for me on HIS birthday?" and simultaneously thinking, "Oh goodness, I think he has SOMETHING for me!" 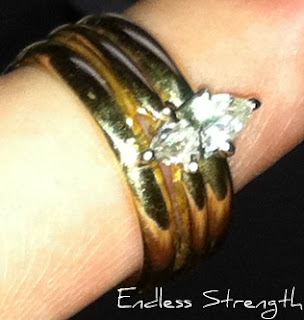 He was able to fish the black box out of his sock and open it and blurt out, "Michelle, will you marry me?"

I saw my sister over by the TV, trying really hard not to pay attention.

And I saw my precious husband-to-be, looking up at me with his awesome grin and big brown eyes - how could I say no, right?
The rest is...as they say, history.  We set an October date which turned into a July date (July 24, 1999) and we've lived happily ever after.
Go check out some of the other links shared at Betty Beguiles and read about some other proposals...that's where I'm headin'!  :)

Posted by Endless Strength at 10:11 PM

Email ThisBlogThis!Share to TwitterShare to FacebookShare to Pinterest
Labels: Craig