What's In A Name?

Naming your children is a grand thing.  It's the pure privilege of the parents to choose the name which their child will be called.  And most would agree, it's kind of a big deal. 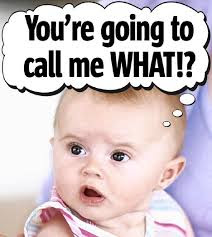 People spend a lot of time thinking of names while waiting for their babies.  Some women admit that they've had the names of their children picked out since they were little girls.  Obviously, once married and expecting, they might have to bend a little to accommodate the husband's preference in names.
There have been studies to determine what a name can do for (or against) you.  And then, various aspects surrounding first names has been written about here (Relationship between Names and Personal Identity) and here (Relationship between Names and Personality) and here (Relationship between Names and Behavior).  I'm far from an expert on the matter, but I think it's kind of inherent in my understanding through naming my children, that it's a pretty important thing.
When we were choosing a name for our first-born, we were very particular about a name that couldn't be shortened.  For some reason, we didn't like the idea of a nickname for our first daughter and as soon as a name came under consideration, if a nickname was readily available, that name was usually cast out.
What's kind of funny is that when I mentioned this to my grandmother when Sarah was a few weeks old, she mentioned that "Sally" was a nickname for Sarah.  I had never heard of that before, but I guess it made sense since I couldn't think of any other girl name for which "Sally" could be a nickname.
But nonetheless, Sarah has been Sarah from day one and the only fond pet-name we've come up with is "Sarah-Bear" and that's used pretty sparingly.  Sarah's name has always felt like a perfect fit.
Now for the funny twist.  When we found out we were pregnant with Dani, Craig mentioned Danielle as a name and instantly I was open and embraced the nickname, "Dani".  I'm not sure why the nickname thing didn't bother me that time...but it didn't.  And when Dani was born, I immediately called her Dani even though her name was Danielle.  I just had a hard time calling her Danielle.  Dani was her name.
Helen's name was a natural choice for no nickname, too.  No thinking on that one.  Again, I never had a problem calling Helen by her name and it's always fit perfectly.
When Dominic came along, I realized that certain nicknames could come up ("Nic" being the one I didn't care for much and "Dom" becoming one I use sometimes, but not enough that people know Dominic as "Dom").  I didn't stress because Dominic is the kind of name that commands that you use the whole thing, or so I thought.  I think a few people tried "Dommie" or "Dom-Dom" but I nipped that in the bud pretty quickly and nothing ever came of it.  And again, Dominic has always fit my son.
Before the birth of Vincent, I shared with some select people the name we were considering.  When we shared with the kids, Sarah was the first to bring up "Vinny".  Now, on the whole, I don't have anything against "Vinny" but I knew it would not be a proper name for my son.  Call me weird, call me hormonal, whatever...but I just knew I didn't want my son to be called "Vinny" when his name was Vincent.  It actually held me up on the name for a long time because I was very concerned about it.  There were a few other people who mentioned the name and I expressed my wishes that, should we name our baby Vincent, we would not allow him to be called "Vinny" for short.  If we shortened it, we could go with "Vin" or "Vince" but honestly, so far, Vincent has worked just fine.  It feels completely natural to call him Vincent.
Names are funny things.  As parents, we are proud of the names we pick for our children and we are emotionally attached to them as well.  We put a lot of time and effort into naming our children, and it doesn't take much to rile our hearts - simply make the wrong comment about our child's name and it's likely to provoke a response.
When it's NOT our child whose name is being discussed, it's easy to think the parent of that child is overreacting to what is meant as a good-hearted "joke".  Growing up watching siblings' names be twisted into forms of mockery (newsflash:  kids can be cruel) impressed upon me how quickly and dramatically the work of the parents in the naming department can be reduced to "rubble" by an off-hand comment or "joke".
What are your thoughts on names?

Posted by Endless Strength at 9:59 AM