I really ought to be going to bed right now.  I mean, everyone else in this house, baby included, is peacefully slumbering away.  But I feel compelled to update you on some developments around here.
1)  I got my hair done a few weeks ago.  Blonde highlights.  Bangs.  Layers.  And I like it.  Oh yeah, and I'm working my behind off (literally) trying to lose weight.  With 6 weeks to go until I return to work, you can bet I'll be working hard to be back in shape (at least enough to fit into some pre-preggo clothes).  I've walked a bit.  Next on the agenda is a new pair of running shoes, though!
2)  Vincent, I believe, has turned the corner and sleeps 6+ hours regularly.  Get this.  On Friday and Saturday nights last weekend, he pulled 8+ hour nights!  I had to change his crib sheet both Saturday and Sunday mornings because he'd slept so long that his diaper overflowed!!  Ah and Mama didn't mind one bit!
3)  Not to be outdone by his little brother, Dominic decided to pull some shenanigans of his own!  We've had a majorly positive development on the potty training front since this conversation last week.  I took the four older shorties shopping Sunday and we were in Marshall's when Dominic spotted Spongebob Squarepants underwear.  Now...I never even thought they might make Spongebob Squarepants underwear.  And even if I did, I probably wouldn't have thought they'd make them in a size that would fit Dominic.  BUT.  Oh but they DO make them in a size that would fit Dominic and he insisted that he'd go pee-pee in the potty if I would just buy him a package of Spongebob Squarepants underwear.  Yes.  Really.
Well, Sunday night, Craig put the boy in his Spongebob Squarepants underwear and he wore them around the house, unsoiled, the remainder of the evening.  Then.  Shortly after Craig left for work and as we were getting ready for bed, the miracle happened!  Yes, my boy pee-pee'd in the potty.  Yes!  Oh and he did it standing up, too.  LOL.  Then my son went to his room and paraded around holding Spongebob Squarepants underwear high over his head saying, "Spongebob Squarepants underwear!" over and over again.
Dominic refused to put a diaper or a pull-up on for bed.  He insisted on wearing underwear to bed.  And, seeing as he has awakened dry most days for the past year, I rolled with it.  And he woke up dry Monday morning.
Monday was a bit of a struggle.  He had an accident since he wanted breakfast before going potty.  Then he didn't go all day at the daycare, even though she took him regularly.  He stayed dry all day (holding it I think) and then he soiled his pull-up on the drive home.  So, Craig put him back in the underwear for the evening.  He did go in the potty, but then had an accident with #2 later on.
But.  Tuesday.  Oh, lovely Tuesday!  My boy had success first thing in the morning!  We took him regularly throughout the day, but he didn't go.  BUT he stayed dry also.  We were out visiting Craig's sister and then stopped by his mother's.  While at Grandma's, Dominic went to the potty there and was successful!  Oh how we partied.  He remained dry until we got home and we continued to take him to the potty regularly.  After dinner, success again!  What a big boy!  Then, before bed another success!  So, I think we've had a breakthrough.  How about that?!?!
3.  Helen is a stinker.  That is all.
4.  Oh wait, that's not really news to anyone.  She's a lovely and sweet stinker, but she's a stinker all the same.  (Details on this in a forthcoming post.)
5.  Due to the aforementioned sleep my almost-6-week-old had over the weekend, he is now gargantuan compared to his birth size.  He looks like a different baby!  Well, not different, but most definitely BIGGER!  (Pictures in a forthcoming post.)
Okay, I lied...I found this picture of Vincent that I took while he was waiting patiently for us to head out for Mass on Saturday: 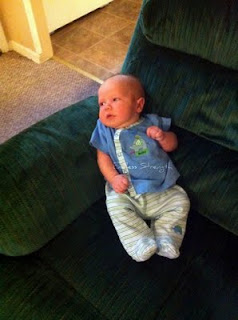 6.  Something very cool happens to little girls between the end of 4th grade volleyball and the beginning of 5th grade volleyball.  Something called coordination.  Probably a lot more than that...but all of it together makes for some great strides both physically and mentally.  Looking forward to seeing what the girls can do this year!
7.  Dani is quite the artist.  Her grandmother took her to a ceramic place where you can pick a piece and paint it.  She painted a little decorative ceramic guitar.  And it really looks amazing.  (Again, I'll have to show you a picture in another post...I really do need to get to bed).
I think that is all.  I have a few posts I have been working on, but it's much more difficult than I remember to get things done with a newborn around.  Perhaps when the kids start school next week, I might find some time to work on them.
Happy Wednesday!

Posted by Endless Strength at 11:20 PM

Email ThisBlogThis!Share to TwitterShare to FacebookShare to Pinterest
Labels: Just Me, Kids, Motherhood