My Thoughts on "Tiger Mother" 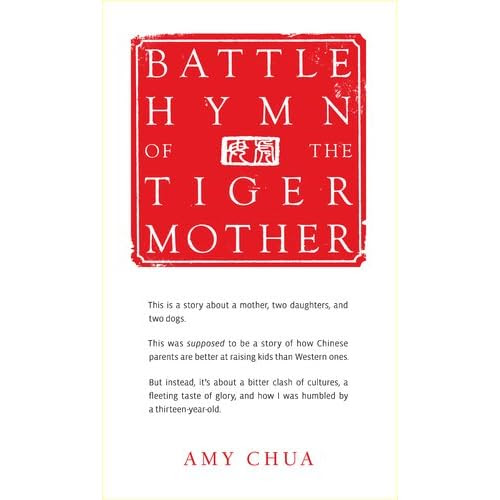 I read Battle Hymn of a Tiger Mother almost a month ago.  I had heard of the book because of this article that was posted on an internet forum with a discussion that followed.  When my husband brought the book home from the library, I kind of raised my eyebrows, but figured...oh well, if he wants to read it, okay.  I wasn't interested in reading it.
Craig read most of it while I was in labor with Vincent (yes, that little stinker who wouldn't be born until 10:37 PM!)  He told me about parts of it that day.  He told me the author lived in Durham, NC (working at Duke University) because he knew I lived there for a couple of years (finished high school there).  And he said, "You need to read this book."
I'm not sure why I NEEDED to read it.  Having read it now, I can safely say that my life would have been just fine if I never read it.  But it was interesting.
The book is written by Amy Chua, a Yale law professor who grew up in the United States as a child of Chinese immigrants.  The book is about the Chinese way of raising children and why she thinks it is better than Western parenting.  I think some of her experience is exclusive to being raised by immigrants.  But quite possibly much of it is a Chinese parenting thing.
There were times I was shaking my head while reading the book and thinking, "This isn't a cultural parenting thing...this is an insane woman thing."  There were a few times I stopped reading, looked at my husband and said, "I think this woman is just crazy.  I don't think it has anything to do with her being Chinese."
But then there were times when I sat back and I thought about it and realized, "Maybe she's not crazy.  I suppose I see it that way because I could not imagine raising my children this way."  And, since I was born and raised in a "Western" cultural parenting model it is comfortable to me and as we say around these parts, "Well, I turned out all right..."  And maybe that's what Chua doesn't like about Western parenting in that we're all okay with our children turning out "all right" instead of expecting our children to be elite musicians or attend Ivy League schools.  I'm not saying I wouldn't be ecstatic for one of my children to achieve the things she wants her children to achieve, but I'm not sure the price she pays is worth it relationship-wise to push it and try to MAKE my children achieve these things because it is I who wants the achievement and my kids couldn't care less.
It's been about 4 weeks since I finished the book.  I forgot that I was going to blog about my thoughts on it until I came home from volleyball practice to hear Craig discussing something with my sister in which he all but accused ME of being a "Tiger Mother."  I wonder what woman he was thinking of when he made that comment.  I suppose my expectations of my children (which admittedly are far below Tiger Mother's expectations for her children) seem quite lofty to my husband.
Based on this book, my kids have a cake-walk of an existence.  I don't force them to practice a musical instrument 6 hours a day in addition to their schoolwork and I haven't required they learn a foreign language yet.  They ARE allowed to have play dates (actually they are encouraged!)  In the United States, I think it's established that we like to let our kids be...kids.  This is frowned upon by the Chinese parenting model as put forth by Chua in her book.
The best way to really understand the book, though, is to read it.  I found myself doubting that the way Amy Chua was raising her children was really the way ALL Chinese parents raise their children.  Part of that feeling was probably a result of my inability to comprehend anyone wanting to do that to their children.  Part of it was probably my own opinion that most people can't (or won't) be told HOW to parent their children.
I think the way the book rounds out is interesting.  The family is on a vacation in Russia when tensions hit a boiling point and one of Chua's daughters tells her that she hates her and she hates the musical instrument which she has been forced to play for hours upon hours per day for years.  After the blowup, Chua has some time alone and resolves to approach her children differently.  The remaining chapters describe what changes in the way she interacts with her children and then also what changes regarding how they spend their time.  Chua is to be commended for her ability to recognize when she'd gone too far and to change course before alienating her children completely.
Maybe THAT is really what the book is all about anyway.