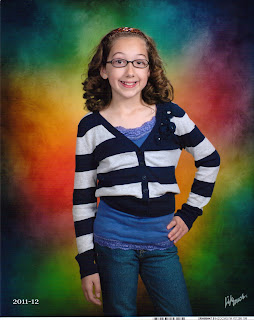 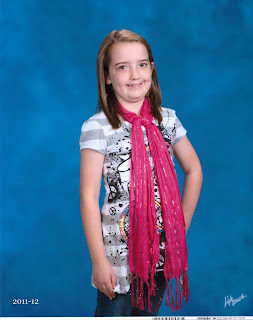 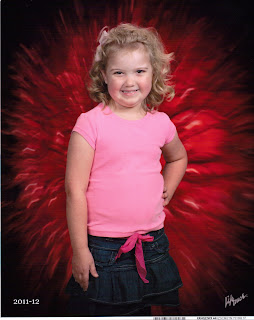 She is my heart and soul.  There's just something about Helen.  There really is, too (I'm not just saying that to be cute).
--- 4 ---
This week, a 10-month old girl went missing from her home.  This is right in my neck of the woods.  Probably only a couple of miles from where I live.  It's kind of been on my mind this week.  I would be sick if one of my babies was taken, went missing, whatever is going on.  At first, they issued an Amber Alert.  The story was the girl was abducted in the night from her crib.  Then it came out that the cell phones were missing from the house, too.  Now, apparently, the parents are "no longer cooperating" with police investigation.  Very odd.  Very strange.  Very tragic.  Prayers all around.

--- 5 ---
At Dani's soccer game last night, I got a little freaked out when I lost sight of Dominic.  There are woods around the park where the soccer games are played.  I couldn't see Dominic anywhere.  I had tried to gather Sarah and Helen while trying to hold onto Vincent and took my eyes off Dominic for the smallest of moments.  And then he was gone.  Of course, I was worrying about where he wandered off to and whether someone had taken him.  Especially with the recent abduction/missing baby in our area of town fresh in my mind.  It was probably only two minutes that I was freaking out and telling every person who asked what Dominic was wearing and how old he was...but it felt like 30 minutes.  It was horrible.
And then I saw him running aimlessly around the soccer field.
I think it's true what they say about a mother's schizophrenic emotions.  One minute, I was crying inside wanting to hug and hold my son, fretting, almost panicking.  The next minute, I wanted to swat his little bottom and tell him not to worry his momma that way.  Don't worry, no swats took place...he was, after all, simply enjoying some awesome weather and being a 2-year-old boy.  He didn't think there was anything wrong with running around aimlessly without a care in the world.
--- 6 ---
We have a volleyball tournament this weekend.  Pool play Saturday and if we have the best record in pool, we move on to the tournament Sunday.  The girls are improving all the time.  Last week, they won their first match.
Well, okay, they one (ahem) won the very first match they played, but I don't think that team was awake...because I've seen them play since and they've done MUCH better.  Our team has progressed, but just haven't had a lot of wins to show for it.  Here's to turning the corner!

(OMGoodness, I came back to read my post and see I had put "one" instead of "won" and I about died.  I'm major OCD about my grammar/spelling!  my own...not anyone else's...usually)
--- 7 ---
My post yesterday about Where I'm From (writing exercise) gave me some ideas for blog posts.
I also have three posts started in my drafts, and I just can't seem to get any traction on them.  One of them will be written if and when I ever get around to writing the letter I want to write to my doctor.  Another is a compilation of things about being Catholic that no one ever told me growing up and I wish they had.  I mean, I'm a cradle Catholic...but I never really learned some very important things about Catholicism until I was 28 years old.
What do you do when you feel "stuck" with your blog?
Have a terrific weekend!!
For more Quick Takes, visit Conversion Diary!

Posted by Endless Strength at 3:00 AM