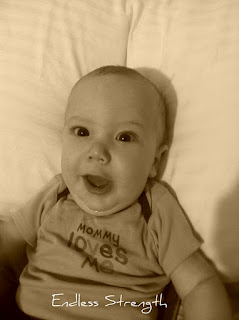 This kid makes me smile.  All. The. Time.  He is happy most of the time.  He loves it when I walk through the door arriving home from work.  He wants me to hold him most of the evening.
Vincent has really brought a calming presence to our family.  At least I feel calmer with him around...and I guess that's all that matters.  :)  I think he enjoys being doted on by his older siblings and for sure his momma.  He watches them.  When he focuses on his toy bar hanging above him when he's in his bouncy seat, it's really kind of funny.  And when he is kicking his feet, that's pretty funny, too.
--- 2 ---
5 months is such a sweet age.  I forget about that, until I have another baby who hits 5 months.  At this age, the babies typically aren't sitting up all the time by themselves and they aren't quite ready to start pushing up to crawl or anything.  They still need to be fed their bottle (yes, we're bottle/formula feeders at our house) and they need to be supported much of the time in order to look around and interact.  But they love to look around and interact!  Vincent really enjoys watching...ME!  I catch him more often than not, just looking at me and watching me.  Sometimes he babbles, but sometimes, he just gets his goo-goo eyes going and makes my heart go pitter-patter.
--- 3 ---
Vincent got to meet his Grandad this month: 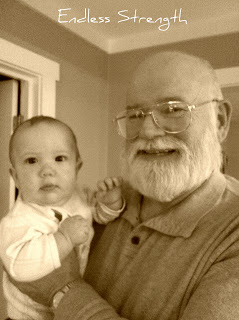 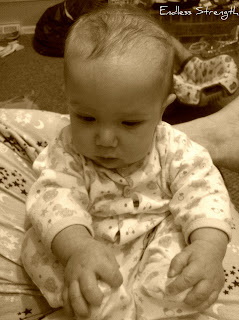 Vincent also really enjoys playing with his feet.  Lay him down to change his diaper and he grabs his feet.  Put him on the floor, he grabs his feet.  Cradle him in your thigh/calf...he grabs his feet.  You get the idea.
--- 5 ---
Vincent is also a very active baby.  He kicks his feet in such a way that it looks like he's doing an Irish jig or something.
--- 6 ---
Vincent can roll over (been doing that for quite awhile...I wonder if it has something to do with him being a tummy sleeper?) and he eats rice cereal pretty well.  I'm not very religious about giving him the cereal.  Some nights I remember and some I don't.  I suppose I should drag out our high chair.  I think it's funny how different a mom I am now than I was when I had one or even just two kids.  With Sarah, as soon as we started cereals and foods, I was right on schedule trying something new as soon as I ascertained she had no allergies to what we'd already introduced.  Now, it seems I figure, if Vincent is okay having 10 oz of formula instead of some cereal and maybe 6 oz of formula before bed...okay.  Or if he eats 5 bites of cereal and then fusses, I just get him down and feed him his bottle.  With Sarah I was adamant that she finish her cereal!  Just kind of interesting.
--- 7 ---
At night, I've been trying to see if Vincent will get himself back to sleep.  This is tricky because he shares his bedroom with Dominic and I really don't want Dominic to wake up.  But, through this process, I've noticed that Dominic sleeps really hard, so it would take a lot to wake him up!  And Vincent is going a little longer waiting for me to come and get him from his crib.  Sometimes he gets himself back to sleep and sometimes he doesn't.  He's not crying at all, just flips himself onto his back and starts babbling.  The babbling gets louder and louder until I know he really needs me to come and get him out of his crib.  I know if I don't give him a chance to try and figure it out, he may never figure it out.  But he's still pretty young yet, so I usually go get him and try a bottle if he doesn't self-soothe back to sleep in a reasonable time.
I just can't believe I'm a short month away from the "magical" (for me) 6-month mark.  I'm always just a little more at ease about everything when the babies are sitting up and eating more table food and starting to try to crawl.  But I do think I will miss this stage, too.
Have a great weekend!
For more Quick Takes, visit Conversion Diary!

Posted by Endless Strength at 5:45 AM