--- 1 ---
Vincent hit the 6 month mark at the end of December.  Finally, a week before he hit the 7 month mark, we got his pictures taken.  It's funny, when Sarah was a baby, we got her portrait done every month of her first year.  Ha!  We wised up after that and we document our babies' growth by getting portraits done at 3-months, 6-months, 9-months and then at 1-year.  We also go to Portrait Innovations and get their $10 deal (you get a bunch of pictures...but of only 1 pose).  Anyway, here is my baby boy: 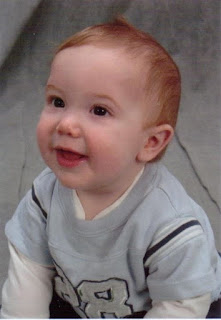 --- 2 ---
And because I know you just can't get enough of my sweet boy, here is a picture I got of him at home about a week ago, just sitting.  He has been sitting up for about 2 or 3 weeks now.  He occasionally will fall over still, but for the most part, can sit and play without problems. 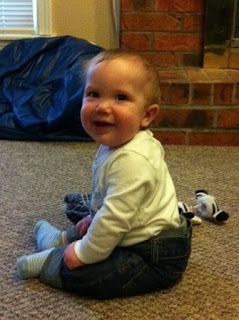 And if you think he looks like he is having too much fun...well, he is!  :)
--- 3 ---
A couple of weeks ago, I got this picture of Dominic playing with Vincent.  It warms my heart.  Of course, Vincent looks at Dominic like he is the greatest thing ever.  (Well, okay...maybe not quite the greatest, because that would be how he looks at me, but Dominic gets a look like he's the 2nd-greatest.)  I can't wait to see how these two develop and grow together. 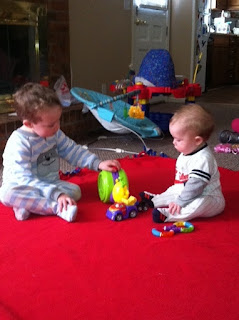 --- 4 ---
I was disappointed that I didn't get anything up on the blog this week.  It's a very important week.  The March for Life took place this past Monday.  Someday, I'm gonna get the days off and I'm gonna go.  I really want to go the first time Sarah goes.  And I know she's going to go at some point.

But for now, I have to live vicariously through Bad Catholic's blog, among others.  And although I was slow, I did finally get something up about it today.  THIS POST was the whole week in the making.  I just couldn't figure out what I wanted to say necessarily, but I felt called to write something.

--- 5 ---
I made it to Spin Class again last night.  I guess I keep wanting to tell you all that because at least then I get to report something!  I have been unsuccessful in getting to do anything else.  It partly makes me want to pay for another session so I will at least continue going to this.  I also have the thought to see if there are any other evening group exercise classes I might be interested in at the Community Center.  The kids actually do pretty well.  The boys go to Child Watch, the girls have stayed home for an hour, but I think I could even let Sarah and Dani shoot baskets or something while I work out now.  Anyway...three more weeks of Spin Classes...so I really need to figure something out.

Any ideas from you all about how I could get more exercise in?  I can't seem to get my butt out of bed in the mornings (thank you, Vincent, for your still sporadic 3 a.m. wake up calls), I'm most likely not going to do any exercises you read about doing in your living room.  Oh well, I am sure something will work out eventually.
--- 6 --- 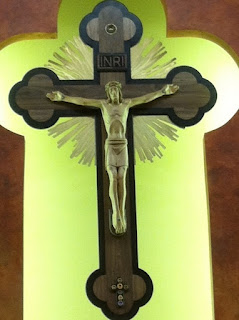 THAT is the new Crucifix hanging in our parish church.  It's beautiful.  It's a piece of art, really.  It's handmade by a parishioner and get this:  there are 8 third-class relics incorporated into the cross, all donated.  When Father told us about it last week at Mass, I learned that a relic is first-class until it's been handled, and then it becomes third-class.  All of the relics in the Crucifix are bone fragments from the Saints represented.  I also learned that the only way we could display it here is if he had all the authentication stuff to prove it was what he said it was.  Several were donated recently, one was donated a while ago and forgotten, then found.  It's really incredible.  See QT#7 for a list of the relics.

We are so blessed with this new addition to our parish.  I made the picture of it my wallpaper on my iPhone.  I love that I can look at it so often that way.
Have a great weekend everyone!
For more Quick Takes, visit Conversion Diary!

Posted by Endless Strength at 2:49 PM