You know, I think TOOJE needs to make a button for her mumbles.  Then all of us who participate every so often, could have something that would pop up in your little window and you'd say, "Ahhh!  It's Mumbles time!!"  :)  What do you think, TOOJE?????
1.  Dani's team didn't win the championship in their tournament.  It's okay.  The other team was WAY aggressive and wasn't really following the rules.  It's supposed to be ONE-ON-ONE, not THREE-ON-ONE, but whatever.  Our girls played together, played as a team and were still positive after the game where the other team hacked/bullied/ganged-up-on them the whole game.  They played the consolation final the next day and did well.  I think Dani is just happy to have played and hopes to play again next year!
2.  Now, we are getting ready for Spring volleyball to start.  Sarah's registered for "Semi-competitive" and I must say, I cannot wait to actually see how much she improves with someone else coaching her!  It's really hard to coach your own kid (my opinion) and so I am excited to see what a different coach can motivate her to accomplish.  A couple of other girls from Sarah's class are playing in the league, too.  Good for them (I think) to learn to play with other kids.
3.  Saw this in the paper Friday: 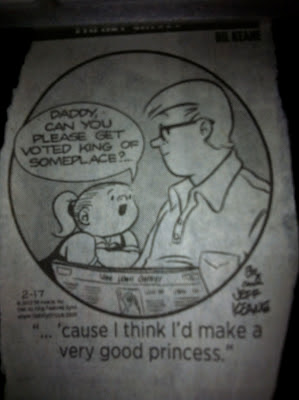 It reminded me immediately of Helen.
4.  Speaking of Helen...she turns 6 on Thursday.  Wow.
5.  I spent this weekend doing a lot of writing about my experiences with Natural Family Planning (NFP).  Rebecca at The Road Home and I are collaborating on a piece to run this week and we hope to get many other bloggers involved.  Keep an eye out!  We want your stories!  We are the 98%!  :)
6.  Craig got a promotion recently at work.  Yay!  Actually, they offered him this promotion a year ago and he backed out at the last minute.  We had so much going on last year (that whole adding a member to our family thing) that it wasn't a good time.  But then they offered it to him again and now it's official!  I am very proud of him.  This means that his schedule is changed up a bit and he will be going into work at 3:00 p.m. in the afternoon a couple days a week.  It will be a new adventure of later-day daycare for the boys and after-school care for the girls.  New adventure of Mommy-better-leave-work-on-time-or-else, too.  Crazy.
7.  It's a Pillow.  It's a Pet.  It's a Pillow-Pillow-Pet! 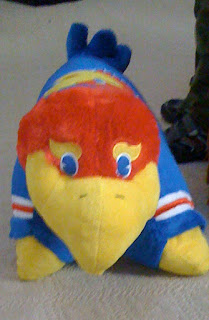 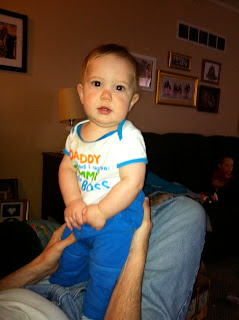 9.  You know what's crazier?  He's scooting around and trying to crawl.  He mostly goes backwards, but it's only a matter of time...methinks not very long actually...until he's a roaming terror.
10.  Oh!  I don't have to go to work today!  I like Monday-Off-Mumbles!  Have a great day!
If you like the Mumbles...and if you want to badger TOOJE into making a Mumbles button, go visit her and see what she's got going on today.