My last post kind of stuck in my craw for a bit. I don't like writing about the hard parts of having children. I don't like acknowledging publicly that I have a hard time with these crazy pre-adolescent years. But the fact of the matter remains that it's a big unknown for me, and just like the ages that come before, there will be parts that I like, parts that I could do without and overall, I'll be glad when the teenage years for each of my children are finished.

So, there are a few cute things I have noticed lately that I wanted to share.  Namely, how cute is it that Sarah has a crush on someone?

Quick Side note:  It was NEVER considered "cute" to have a crush on a boy in my house when I was growing up.  I had crushes on boys but I NEVER admitted it publicly where my parents were concerned.  They were always adamant that I "didn't know what I was talking about" when it came to my feelings for boys.  They could never see a crush for what it was -- a crush.  Nothing more, nothing less.  I thought a boy was cute, I was way too shy to talk to him face-to-face, but was thrilled to have a regular phone conversation with one boy during 7th grade. When  my mom found out that I actually liked the boy that was calling the house every evening,  she did a lot to try and persuade herself - and in due course - me that there was nothing serious about it, it didn't mean anything, it was just silly childhood games, etc.  Of course, looking back, I don't necessarily see my parents' attitudes on the subject as the most healthy way to address it with me, therefore, I have chosen a different tactic with my Sarah, so far.

Sarah has a crush.  She admitted as much on Instagram one day.  I informed my sisters and Craig.  Then I asked Sarah if she realized she'd been rather public with her declaration -- to the point that her mom and dad knew who and all that stuff.  She affirmed her knowledge of this fact and left it at that.  She's pretty private that way.

As the kids get older, I am always looking for those things where I can relate to them a little bit.  Even though their lives are their own, their experiences are their own, I want to be able to remember what it was like to be in that place.  I realize that I, too, experienced some of those things (the good and the bad unfortunately) and try to walk with my children through these times in their lives.

So, I have to admit that knowing Sarah has this crush on a boy thrills me in that part of my heart that yearns for similarity with my daughter. I remember my crushes when I was 11 and 12 and 13 and....well, you get the picture.  I remember being too shy to talk to anyone about it.  I remember how my heart pounded when I got phone calls.

I also remember how my heart felt when the boy that called me during 7th grade told me that he wasn't going to call me anymore.  Interestingly enough, as I look back, I realize that I got over that pretty quick, but I do remember that little twinge I felt at rejection.

Another thing that really warms my heart recently is how much love is being shown to my 3-year-old Dominic.  He is in preschool at our parish school so he has the opportunity to interact with the boys in Sarah's class.  And they sure do seem to enjoy him a lot.

Here are a few of the things:

1.  Sarah told me that the kids in her class have her bring Dominic to where they can see him as they pass through the hall to go to their carline in the afternoons after school.  They like to wave at him.  I have no idea what shenanigans he is doing as they wave and call to him, but I'm sure he's entertaining them somehow.

2.  When we got out of Mass Saturday, Dominic left the pew and received hugs from one girl in Sarah's class, then another girl came up and asked Dominic for a hug, too.  He then paraded around the parish hall getting high fives and hugs from older kids in the school who were at Mass.

3. I was checking stuff on the Sycamore site for school. They have a section that says "blogs" that is NOTHING like a real blog. Anyway, one of the boys posted this:

4.  And finally, Sarah has been collecting Dominic's autographs for kids in her class which cracks me up.  I am not sure which I find more interesting - the fact that Dominic is able to write his own name so well or the fact that a bunch of 11 and 12-year-old kids want a copy of it.  Additionally, she's been taking lots of pictures of Dominic and putting together cute pictures collages of him. 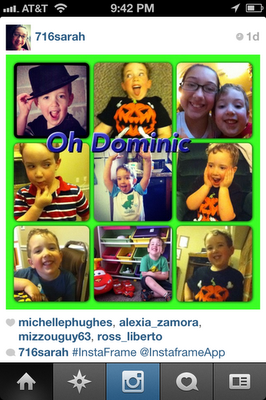 What warms my heart the most is that she is spending quality time with her 3-year-old brother (okay, he's almost 4 now) and they have a lot of fun together.

Posted by Endless Strength at 10:16 PM