So, the world didn’t end today. Or at least mine didn’t. How about you? I suppose we still have about 12 hours left in my world. I don’t think I’m going to worry too much about it.

**You know, it just occurred to me that I didn't respond in any way on this blog to the horror that occurred in Newtown, CT last Friday.  Truth be told, I just don't think I have it in me.  It's unfathomable, unspeakable and utter tragedy and I look at my baby girl, Helen, and can't imagine a world where it was possible that she wouldn't come home from school one day and we'd have to go on without her.  So, literally, I continue to pray for the children who died (and the staff), the families trying to go on without their family member, and all the people in Newtown, and in our country.  What a sad, unspeakable day in the history of our nation. 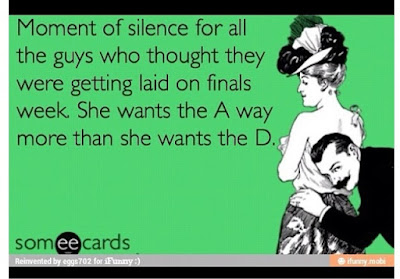 (posted by a friend, that you know, who is someone she interacts with every day in person) will pop up in her feed...at which point, you will most likely end her access to Instagram because between this and other things that kids too young to handle social media do while using Instagram, you realize it is JUST. NOT. WORTH. IT.

On Sunday last weekend, the kids got to see Santa.  I was very surprised that Vincent walked right up to Santa and sat on his lap and played with the bells he was holding.  Not scared at all.  Makes me wonder if his interactions wtih my dad recently (who maintains a very Santa-like beard) had anything to do with it. 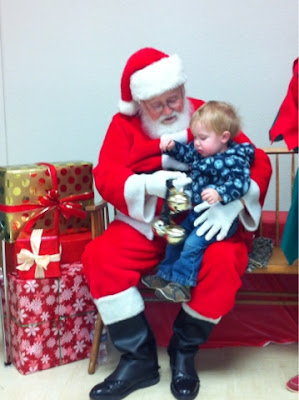 Dominic was his usual forthright self and talked with Santa with no problems.  At least this time we were able to get him to come on down when his turn was over. 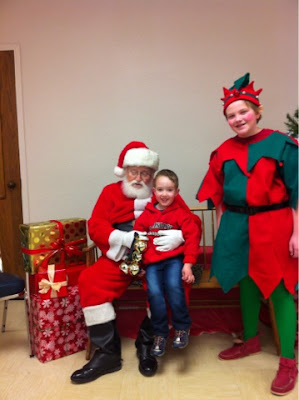 Even Dani is still good with Santa.  :) 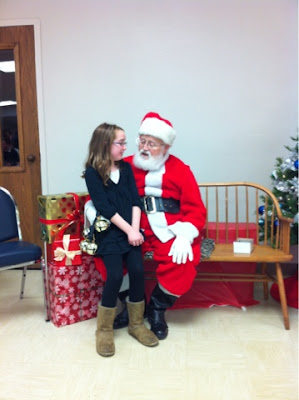 --- 4 ---
Sarah may not do the sit-on-Santa's-lap deal anymore...but she does like fooling around with the iPad and taking funny pictures.  The first one she took of herself.  The second one, I snuck in the other day as I noticed she was holding her volleyball while watching T.V. and I thought it was way cute. 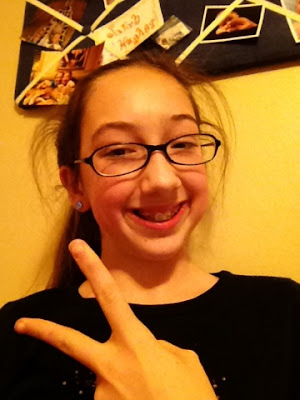 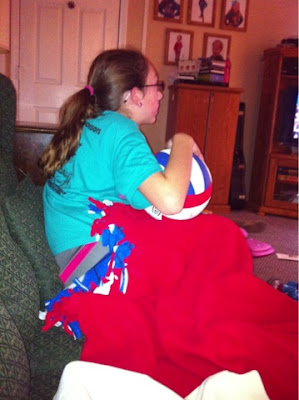 Lately, Helen has been open to me messing with her hair.  At least sometimes.  In small doses.  The other night she let me braid her hair in two french braids.  I think she wanted the kinky-curl that comes from that, but I really like her hair braided regardless.  She is growing her bangs out, so I was able to get them into the braids, too. 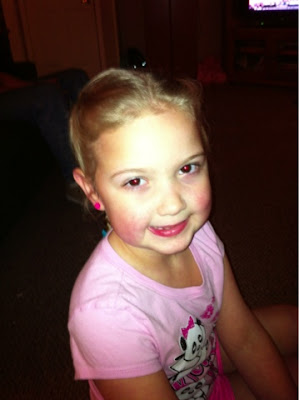 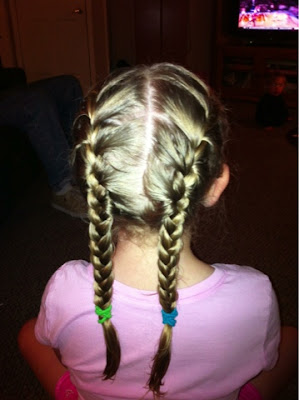 Fatigue.  That is what I have in large doses these days.  I am trying to keep a few workouts each week going, but last night was not one of those and I literally fell asleep on the couch almost immediately as soon as I got comfortable.  Craig had taken Dani to swim practice so it was just me with the rest of the kids and I literally was just laying there unable to keep my eyes open.  Mother Mary, please help me get through the next 6 weeks with some coherence.

Christmas shopping and shipping has been complete for over a week.  Guess who's been procrastinating on the wrapping part of this season?  Holy Moly, this weekend is not going to be too much fun because I have GOT to get my wrapping done!!  I really don't want to have to do it on Monday.  Really.

Our Christmas Eve will be spent with Craig getting some sleep, putting together a Ginger Bread Train, baking some cookies and/or pies, heading to 4:30 p.m. Mass and then heading to Grandma's.  Poor Craig has to work Christmas Eve night and Christmas Day night.  :(  But it's just the way the ball bounces sometimes.  *sigh*


Have a great weekend!  MERRY CHRISTMAS to you all!!!

Thank you to Jennifer Fulwiler for hosting and be sure to go check out Conversion Diary for more Quick Takes!

Posted by Endless Strength at 11:56 AM