Happy Friday! It's time for another edition of 7 Quick Takes. I actually have a little bone to pick with an article that I read this week.  Got time to go read it?

The first thing that annoyed me was how stressful they made 3 kids sound. I'm not saying it's not stressful. Actually the transition from two to three children was the hardest we have had. And we had all three the same gender!!

I think the amount of space between the children makes a big difference in how stressful it is -- or at least in the type of stress a person experiences. In my case, when #3 was born, that meant I had 3 children under the age of 5 and that was very stressful for me. In fact, I kind of swore off ever doing that again...but I was on my way to doing that when Gregory was still with us.  But then, in the case of someone that has...say 4 or 6 or 8 years between their second and third child, I can see that being a little easier because the older children could possibly help more, but I can see it being highly stressful to go back to the baby stage after so long out of the baby stage.

What is up with this little statistic from their survey?

"46 percent of moms say their husbands/partners cause them more stress than their kids do."

I don't get that. Does that mean 46% of these women married immature men who won't help out around the house or spend more time on the golf course during the weekend than being a dad?

I mean, it just seems odd to lob a statistic like that out there and leave us all to our imaginations. WHY would husbands/partners cause more stress? Is it because they put pressure on the women to maintain a certain physical appearance? Or do they put pressure on the women to limit the children they are open to? Or do they spend money willy-nilly? I am annoyed at the mention of a statistic like this and leaves it to our imagination just what annoying things said husbands/partners are doing.

The comments from the mom of four (including twins) annoyed me, too. First of all, she's no longer in the throes of raising children, so her mind is muddled. I'm only 12 years in and I have five children and even I can tell you that I look back fondly and have forgotten all the details of the early years with Sarah, but since I am currently experiencing age 1-4 with my boys, I am reminded that surely I was frustrated and spent a lot of time in a fog when I had Sarah, Dani and Helen all from age newborn to age 4 and it wasn't something I routinely laugh off. Sure, I survived, but I don't think I'd appreciate reading someone making light of the early years and then turning around saying the stress is still high when the children are grown. Note: I am not saying there's not stress with the older children.
--- 4 ---

Which brings me to another annoyance in the article. Why is this mother stressing out about her grown children and their job interviews or taking their finals? Do I just take my little advice too seriously, that we should do the very best we can to raise our children to know, love and serve the Lord, to be good citizens and to work hard and then -- at some point you acknowledge that you did the best and it's in God's hands and you pray?

I don't foresee stressing out over my kids' finals at school -- I figure that is on them. Same with the job interview. Of course, I don't plan to pay for college entirely either. So maybe that has something to do with my attitude.

Finally, I get annoyed at this:

It's probably not fair to assign my annoyance on this statement to just this article, but since they put it out there in black and white, I feel the need to address it.

When we started out with three girls, I heard so many people express outright sadness that we were having girls. We heard things like, "poor dad will never see the bathroom" or people would look disappointed when we found out Helen was a girl on her ultrasound.

I heard people say crass things like, "The thing about having a boy is, you only have to worry about ONE <insert word for male body part>. When you have a girl, you have to worry about MANY." I mean, what the heck does a person say to that? And why do boys get a pass on stuff like that? Just because "boys will be boys?" and we don't expect better of them?

I started crossfit this week. The first workout was Tuesday and it was the same workout we will do in four weeks to gauge improvement. It was a 200M run and then we came in and did three sets of three exercises: Ring Rows, Push-ups, Air Squats (we did 15 of each, then 12 of each then 9 of each) and finished with 200M run. I did it in 8:48. So I'll be interested to see how I do in four weeks!

I'm fascinated by this timing of everything. That's a motivator for a person like me, so I'm interested to see how this works into all the workouts going forward.

Finally, a couple of weeks ago, we were notified that National American Miss (NAM) had obtained Helen's name as a potential for the Missouri State pageant. We have never done anything like this. We went to the "open audition" Tuesday afternoon and there I learned there were a couple of options where they could have received Helen's name: Ballet studio or a teacher could have submitted. We don't know any former NAM participants (that we know of) and they listed other sponsors like Ford -- but I have no idea how Helen's name would surface from that vein either. Anyway, they interviewed her on Tuesday while I was getting the information on the program.

Before anyone worries I'm going to let Helen go all Honey-Boo-Boo or anything, this particular organization has a strict no make-up rule for girls 12 and under, and the categories they focus on are community involvement, interview skills, public speaking and work to teach the girls poise and develop their confidence.

So they called us last night and said Helen is a state finalist. My baby girl will be in the Miss Missouri Princess category at the Missouri Pageant August 9-10. She was literally GLOWING when we told her they'd called to say she's been selected.

Here she is in a picture she took with a reigning Miss MIssouri (I can't remember if she is the Jr. Preteen, Preteen or Jr. Teen): 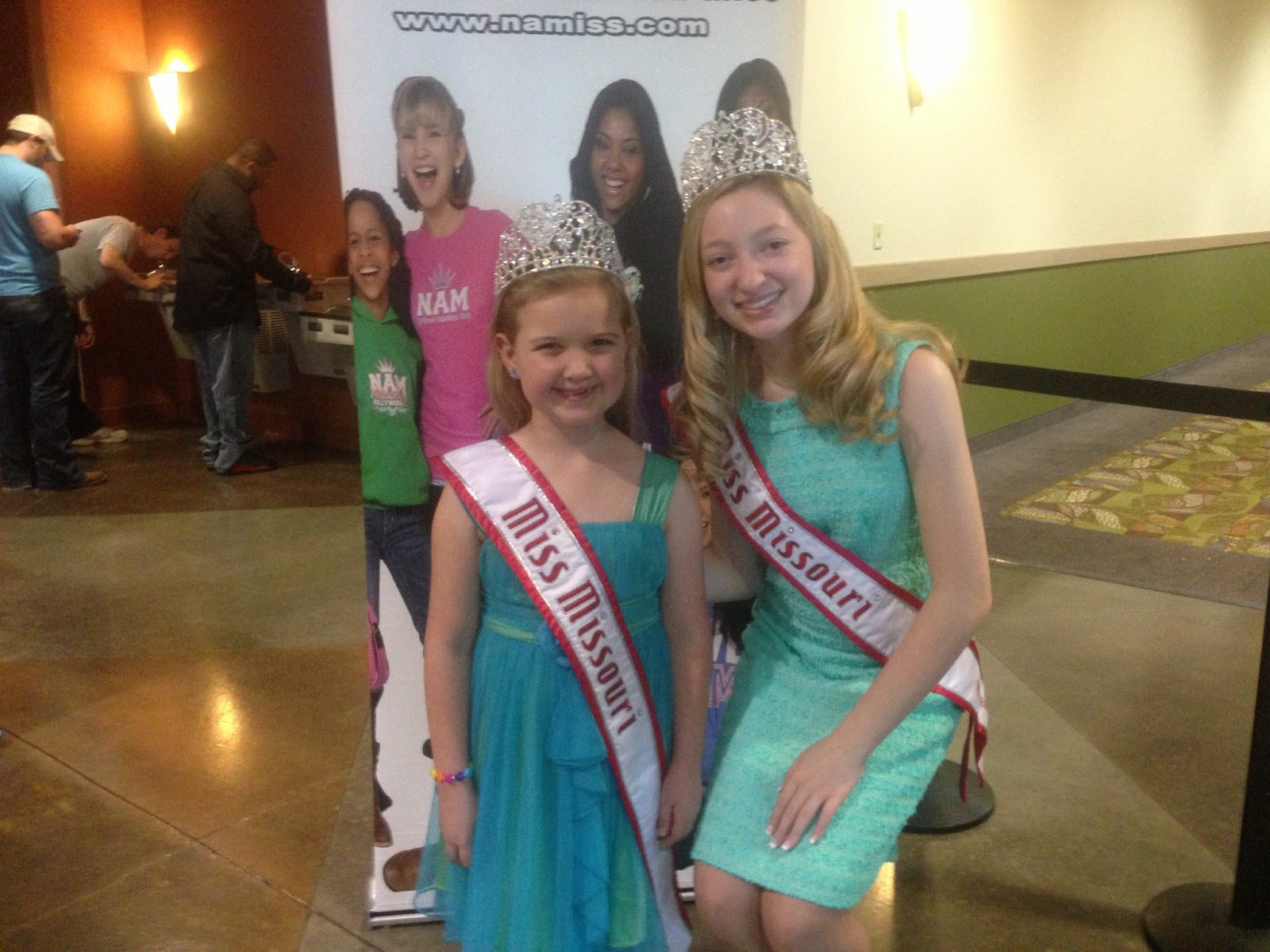 Have a great weekend!!

Be sure to go visit Jen for more Quick Takes!