Thank you to Jennifer Fulwiler for hosting!

I am going to take this opportunity to review for you, I'm Bernadette! by Emily Grace Ortega. Emily sent me the book to read with my children and to review on the blog. 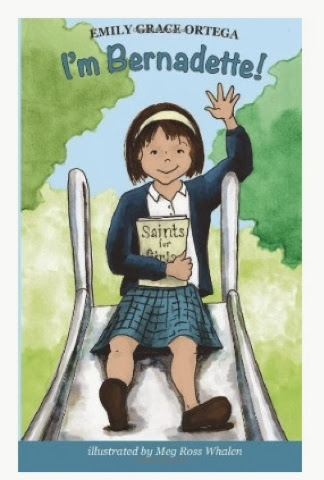 --- 1 ---
First impression: I loved the book! Helen and Dominic often begged for me to read more than one chapter at night and we actually finished the book (10 chapters) in three or four sessions. For Helen and Dominic -- ages 7 and 4 -- to sit still, interested and following along for a book with limited pictures says a lot about how the story captivated my children.

The story centers around a switch in celebration around Halloween time to an All Saints Day parade. Bernadette is in 1st grade and is not necessarily happy that a fairy costume will not suffice (she can't think of any saints who were fairies!) The book does a good job depicting how a 6 or 7-year old girl might think about having to come up with a saint costume as opposed to something or someone make believe.

The family relationships are also realistic and identifiable for the children. Bernadette has two younger brothers who annoy her or in some way aggravate her in her process of coming up with a saint costume. Her 4-year-old brother takes scissors to all her "best" dress up clothes and her baby brother is often crawling around and getting into things and making a mess. Bernadette's point of view is articulated in such a realistic way, I am sure that is why Helen really enjoyed reading Bernadette's story.
--- 4 ---

Dominic seemed to enjoy the chapters where all the other kids were telling Bernadette about their saint costumes. There were points that Bernadette was frustrated that she hadn't come up with a saint to be for the party yet. Dominic enjoyed hearing about the St. Michael the archangel costume one of the boys came up with and he also seemed intrigued with a 4-year-old boy in a book who had an older sister like he did and a younger brother like he did.

I read the book to my kids, but Helen and Dominic could have both read it to themselves. The reading level of the book is probably just under Helen's (she could have read it easily) and just over Dominic's (he might have struggled with a few words/sentences, but could have made his way through it).

A sure sign that my children enjoyed the book: At the back, there was a page announcing that "Christmas with Bernadette" was coming in 2014 and both Helen and Dominic asked if we could read that now. So, I guess I'll have to watch for that book!!

This is a charming book. It delighted my children and made evening/bedtime reading a special time for the days we read it.
This book can be purchased on Amaxon or through HalfMoonBayBooks.com.

Be sure to go check out Conversion Diary for more 7 Quick Takes Posts!

Posted by Endless Strength at 7:06 AM