Parenting "Village" -- Do You Have One?

I remember when I was little -- like, really little, before-the-divorce little -- and my parents always told me that any adult/authority figure who was in charge of me was like my parent. So, if I was at a friend's house, their parents were my parents while I was there and I was to obey them as if my own parents had asked something of me. And if I was at school, all teachers were my parents-at-school, and I was to obey them and listen to them just as I would my own parents. Shoot, even if we were hanging out at the Y, swimming on a summer afternoon, any adult or lifeguard was like my parent there, too.

I remember thinking how I never could get away from parents.

I also remember that if I got into trouble with a parent who was not really my parent, I actually got in trouble twice. The first punishment could be a timeout or even a little spanking from the adult/authority figure I had misbehaved for. And then, when that parent told my parents about my misbehavior, I got punished again.

I remember that misbehaving wasn't worth all the trouble. 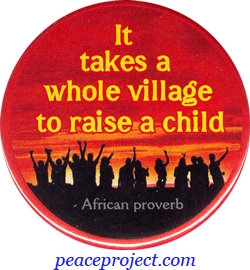 Now I am a parent and I tell my children the same thing. I tell them their teachers are their "parents" at school. I tell them they must behave for their friends' parents and if they don't, those parents have authority to pu them in time out or whatever mode of punishment fits their misbehavior. My kids know not to complain about teachers or other kids' parents to me because I typically will side with the adult in the matter.

But things are different now. When I was a kid, I think most parents held the same view as mine did. Most adults/authority figures didn't hesitate to correct me when I misbehaved and they sure didn't hesitate to tell my parents about my misbehavior. These days, though, I don't feel the same solidarity among parents. As a matter of fact, I believe I know which parents I can expect this from and it's not a large number. I know that I can bring bad behavior to the attention of the parents of a few of the kids we know and they will be grateful that I addressed it and will also address it.

I've been in authoritative volunteer positions and been in the situation where a parent registered displeasure with my reactions and/or disciplinary measures because the child had simply told them that I "didn't like him/her" so the parent was not happy. I've also been in the situation where I have taken corrective action (obviously not knowing whether the parent would be supportive or not) to realize that I cannot expect support from all other parents/adults when their children misbehave. My opinion of what constitutes bad behavior can be vastly different from other parents. Lots of parents say, "That's just the way kids are!"

This blog I read via HuffPo recently really hits home on all five things this nanny cites as reasons why parenting is in a crisis these days. But #3 is one of the most important, I think, and also one of the hardest things to regain, once it is lost:

3. We've lost the village. It used to be that bus drivers, teachers, shopkeepers and other parents had carte blanche to correct an unruly child. They would act as the mum and dad's eyes and ears when their children were out of sight, and everyone worked towards the same shared interest: raising proper boys and girls. This village was one of support. Now, when someone who is not the child' parent dares to correct him, the mum and dad get upset. they want their child to appear perfect, and so they often don't accept teachers' and others' reports that he is not. They'll storm in and have a go at a teacher rather than discipline their child for acting out in class. They feel the need to project a perfect picture to the world and unfortunately, their insecurity is reinforced because many parents do judge one another. If a child is having a tantrum, all eyes turn on the mum disapprovingly. Instead she should be supported, because chances are the tantrum occurred because she's not giving in to one of her child's demands. Those observers should instead be saying, "Hey, good work - I know setting limits is hard."

Read the rest here.
﻿
I really enjoy my time with my nieces and nephews because my siblings -- having been raised in a similar manner -- will parent my children and allow me to parent theirs. We enforce the same sort of punishments for bad behavior and expect good behavior from all ages of child. Once I understand where parents of my kids' friends stand on this issue (and that's not always easy to determine) it makes it easier to monitor those play dates and friendships because I know whether the friends live to the same expectations as mine or not.
It's frustrating to see bad behavior that I feel the need to simply shake my head and turn my kids away. I wish I believed that correcting bad behavior would have the intended effect of helping another child grow. But knowing that some parents would simply be angry with me for correcting their child keeps me silent. And if the bad behavior is pervasive enough, I simply urge my children to stay away.
What is your experience? Do you expect other parents and adults in authority to discipline your kids and inform you? Do you feel comfortable disciplining unruly children?

Posted by Endless Strength at 9:15 AM