Thank you to Jennifer Fulwiler for hosting the 7QT.

--- 1 ---
So, that giveaway from a couple of weeks ago? I only had two different commenters...so I decided to make them both winners. :) I will get your info and send you the book and holy card. 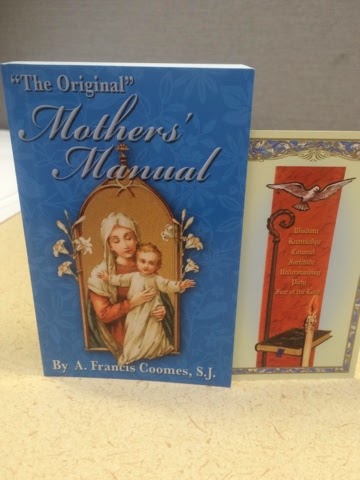 Yeah, that didn't quite generate the interest I was hoping for, but that's okay. I suppose the book/holy card aren't necessarily something everyone who reads this blog would want. I really don't know how to do giveaways.
--- 2 ---
Also, a couple of weeks ago, I mentioned Sarah's volleyball team playing pool for a tournament. Well, they won that tournament! It was very exciting. Watching those girls play now, and seeing how far they have come over the years is so cool. Growing physically helps tremendously and I'm sure the gains in coordination don't hurt either!

--- 3 ---
Speaking of Sarah and ... well, 8th grade. As you know, over the years, the social stuff has always bugged me. It still does as I see that my daughter is still not included in things. What is making it easier is that she seems to be getting over it herself. She and I talked this summer about cultivating friendships with people who want the same thing with her. At the time, there were tears on her part as I am sure it sucks to hear out loud that it's noticeable when someone you want to be friends with doesn't want the same thing. Then there were tears on my part as I shared with her that I just couldn't take another year of watching her heart break over and over. That night, I couldn't be sure whether our conversation would bear fruit.

I'm happy to say that it seems to have planted some seed, and Sarah seems to have made the decision, in the very least, not to dwell on those people who do not bring about a healthy two-way friendship. And, she has spent time and effort cultivating friendships with a couple of girls that, in the past, she had distanced herself from in order to try (in vain) to fit in with a crowd that was never in the plan for her. I'm proud of her for recognizing this would make her happier. I think her coping mechanism is pretty typical for a teenager. (When I asked her if she was "ok" with a recent snub...for lack of a better word...she said, "I don't care" and then returned to the subject of another social outing with a couple of friends that she was trying to line up.)

So...I don't think her world is perfect (what 13-year-old thinks it is anyway?) but I think she's bound and determined to have a good year making memories with those who want to be around her. That's my girl.


--- 4 ---
After my post the other day, I had the inevitable Oh-gosh-did-I-just-do-another-TMI/too-personal-post feeling. But the comments were reassuring and I also received a few e-mails from people giving me support. I am happy to report that Helen had a confidence booster when she got 100% on a pretty challenging spelling assignment that was turned in Thursday. And, when I got home Thursday, she had already done her extra time reading so we could spend time discussing the two chapters she read so I could check for understanding. Maybe it will get better sooner rather than later? I'm not sure, but I am just happy to see my baby girl smile.


--- 5 ---
I weighed in at my Weight Watchers At Work meeting this week, even though I am not required to. I dropped 2.0 pounds! I guess this Paleo stuff is working. :)

Wednesday's CrossFit workout included some skill work and I climbed the 15' rope all the way to the top in about half the time! (I also had my long socks on -- see, I'm smart...learned my lesson the first time!) I also had a couple of really good WODs. I mean, they sucked in that oh-my-gosh-i'm-gonna-die-if-this-isn't-over-soon kind of way. But I actually did a pretty good job on them. And I'm pleased with my progress on my pushups.

--- 6 ---
Hallie and Jen announced the location and dates for The Edel Gathering 2015. I think when the idea for 2014's event was first floated, I was really excited and thought I'd go. But it turned out the timing was off and I couldn't make it this past summer. As I was reading tweets on one of the days of the event, I said to Craig, "you know...I'm going to this next year."

And so...I have booked my room and I am planning to go. I hope to room with my sisters. One sister already thinks it won't happen, but I hope she'll wait a little longer to decide it truly isn't doable. One sister (the one in SC) is thinking she may do it, so I will at least have her. I haven't heard from my other sister (the one in TX).

Either way, I am happy to have it to look forward to!

--- 7 ---
I had a thought this week that my spiritual life needs some recharging. I thought about how blogging through my weight loss really helped me stay accountable and power through. So, maybe if I did a Total Consecration or a 54-day-Novena, I could blog through it and it would keep me accountable and stick with it through the end.

What do you think?

Bonus: Funny photo of Vincent! This kid cracks me up.

Be sure to go visit Jen Fulwiler at Conversion Diary!