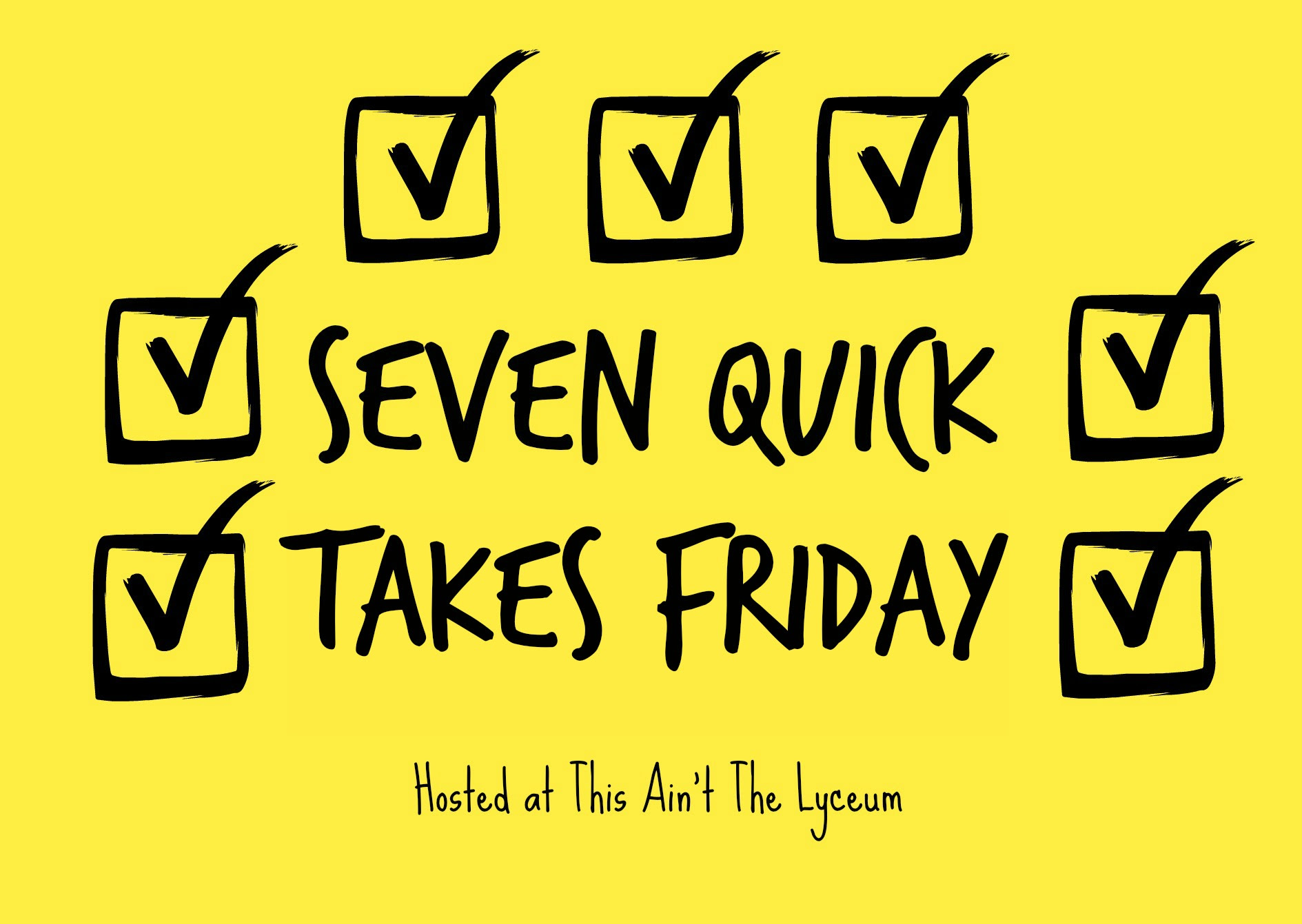 I went to visit Kelly at This Ain't the Lyceum and get the low-down on how Quick Takes works these days. Because...as you know (undoubtedly) it has been a LONG time since I have participated. And I see that I have stumbled upon a week when Kelly has asked us to link up to our most amazing 7QT ever (paraphrasing...not sure those were her exact words).

I only have 92 7QT posts to choose from. That shouldn't be hard, right? I decided to pick the one where I let my guard down a little bit and got a larger number (than usual) of comments.

Without further ado, here's my 7QT Re-run. :) Thank you, Kelly, for hosting!!

Wow, it's been a few weeks since I participated in the 7QT linkup! I guess I haven't been feeling it on Fridays.

I've had a lot on my mind that I haven't been able to get into words lately. Suffice to say that if you remember this 7QT post where I asked for your prayers for discernment, I want to thank you for them. It's been an interesting couple of months as my emotions have run the gamut of joy and satisfaction at the completeness of our family all the way to sadness and loss at the idea of never being pregnant again. NFP is such a blessing to our marriage that gives us the ability to discern and feel a little bit in control of what happens in that regard. I have decided to have the procedure that would mean we should avoid pregnancy until I hit menopause. I will still be ABLE to get pregnant, it's just not prudent as I would have to have the procedure reversed sometime before late pregnancy and of course, it would have to be redone at some point after the baby was born. That's not a prudent use of resources, and the issue I need addressed -- well, it needs to be taken care of. And we thank God for NFP as an alternative to complete abstinence as we head into this period of life!
--- 2 ---

I don't really want to be cryptic or anything about the procedure I mentioned. It's just a little TMI for a Friday blog link-up! But exploring the idea that perhaps God is leading us to a new stage of life has been ... hm ... grueling? I mean, the prayer, the thoughts, the emotions...Discernment is definitely not for the weak!!

I have really learned over the past couple months -- when I've let myself really pray and think on it -- how much my older children need me. We often think about how much the little ones need their moms and dads -- for their very survival! But the older children need us so that we can help them learn to be grown ups.
For example, I've been helping Sarah learn to navigate the rocky waters of pre-teen/teen girl relationships but also how to approach adults in a mature way so she's taken seriously. But that has required a good bit of my time and attention -- and if I had a newborn right now, she would probably be missing a lot of what she needs from me, because let's face it: I can only do so much at a time.
So, Sarah's needs were something we considered a bit more through our discernment process this time than when we have discerned adding to our family in the past. I don't want her emotional and spiritual needs to go unmet because we decided to have another baby.
--- 4 ---

Then, I consider Dani and Helen. Dani just turned 10, but she loves being a little kid with a big imagination! However, I can see her body may end up forcing her into the realm of pubescent preteen much sooner than she would like. And she's so excited to learn all the things she's learning at school, and read all the books (she's currently finishing a Percy Jackson series and asking for another one).

Helen has always needed a lot of my attention -- heck, she gets the bulk of it. And so I've needed to spend time in the evenings reading with her or sometimes just holding her in a hug on the couch for a little bit. Or brushing her hair.

Dani's and Helen's needs are growing, and when we add that to the more complicated and time-consuming needs Sarah presents -- the older kids need more of us than I ever realized before we reached this point.
--- 5 ---

This week, on Tuesday, was the Feast of St. Gregory the Great. I loved Rebecca's comment on this post, btw. At school, during the morning announcements, they have the "Saint of the Day" and so St. Gregory was the Saint of the Day on Tuesday. I found out from Dominic's Pre-K teacher that Dominic's little eyes got big when he heard over the speaker that the Saint of the Day was Saint Gregory. And she said he listened intently through the whole bit about Pope St. Gregory the Great and a smile spread across his face while he listened. When it was over, he just went about his business, but it was very clear to her (watching him) that he really got something out of that.

Dominic is such a tender, sweet, sensitive, intuitive and strong boy. I am amazed regularly at him. Yes, he's smart, too. But he just loves. He loves everyone. And he loves with the most pure, unadulterated joy. It was hardest to get past him as we went through this discernment because he has this huge capacity to love and right now that manifests in his ability to be such a great brother. But I realize that we can foster the growth of this quality in him so that he can spread it far beyond our family. He will often come to me and say, "I miss my brother, Gregory" and give me a hug. I find myself grateful that he was old enough to remember Gregory in my tummy and everything we went through saying goodbye to Gregory because Dominic has a beautiful way of loving us all through our pain.

Then there's Vincent. He's such a sweet and rambunctious boy! He requires so much of our attention and it has only been through this discernment that I have realized how he may have struggled had Gregory joined us here on Earth. He's grown up A LOT in the last couple of months, with going to bed on his own, talking up a storm and showing us all he is capable of physically. But...he still requires our constant vigilance as he's prone to getting into things -- especially things that might be dangerous -- and so he tests our parenting wills on a regular basis.

As it is, he's growing more and more every day. Soon (I sure hope!) he will figure out it's better to go in the potty than in diapers and he will cooperate with potty training. And then, it will feel strange to be in a house that no longer requires diapers, but it will be freeing as well.
--- 7 ---

Of course, discernment took into account our marriage, both Craig and me and our physical, emotional and spiritual needs. One of the things that I kept coming back to was the fact that I'm not getting any younger. Pregnancy, Labor and Delivery take their toll on a young woman's body and they took even more toll on my older, maturing body. Add to that the health issue I needed to address and we realized it was time. We have been so blessed. We praise God and thank him for the five beautiful, healthy children here with us and the one glorious saint He chose to bring into His presence ahead of us. We pray we will join Gregory someday in the presence of God. But for now, we continue to focus to help our earthly family continue to learn...to know, serve and love the Lord, and to move into a new phase in life that includes loving, honoring and serving each other.

Posted by Endless Strength at 8:23 AM